What is a Rebbetzen? And why were a group of 40 of us in Spain?

A Rebbetzen is a bit of an exotic animal; part supportive wife, part helpmate, full time party planner, chauffeur, psychologist, social worker, domestic engineer, chef, cheerleader, community liaison, religious guide and so much more. Primarily though, an Orthodox Rebbetzen is a Rabbi’s wife and we are a group of women who are often defined by our husband’s careers. The best analogy I can give is that a Rebbetzen is akin to the First Lady, but without the big, white house.

As you can imagine this is not always the easiest of lives, though it can be immensely rewarding. The focus is often on our husbands, however the United Synagogue’s Rabbinical Council’s P’eir programme and Valerie Mirvis’ ‘Investing in Rebbetzens’ programme are empowering Rebbetzens to maximise their potential and find their own voice within their communities. Rebbetzens get to share best practice and most importantly receive inspiration which we take back to our homes and communities.

The ‘Investing in Rebbetzens’ programme which Valerie created four years ago together with Rachel Shababo, Director of the Chief Rabbi’s Centre for Community Excellence, offers a select number of programmes during the year, with the highlight being an annual two-day trip abroad. The trip is filled with learning, history, touring, fun, inspiration, bonding and friendship. This year I was privileged to join the fourth such trip, this time to Spain.

We started out in Barcelona, the Catalan capital, searching among the exterior walls of the old city buildings for remnants of Jewish life. In a place where one in every ten people was a Jew, we were left with an engraved plaque with Hebrew letters, portions of tombstones high up in a wall of the Grand Royal Palace and the faintest of echoes.

Our fantastic guide, Rabbi Raphy Garson of JRoots, together with his wife Deborah, were able to bring the ethereal into focus, setting the scene for what was once, in the golden age of Spain, a community that grew and thrived in the beautiful costal city. Rabbi Garson set the scene for the Disputations between Rabbinic greats and well learned Jewish converts to Christianity, trying to disprove Judaism. We tried to imagine the tension as Jews defended their religion and their right to exist.

We visited the beautiful Mont Juic (Jewish Mountain) and were treated to wonderful cable car rides so that we could experience a 360 degree view of the beautiful city. Rebbetzen Emma Taylor gave an excellent and very thoughtful shiur entitled ‘Looking back to our future; paradigms of Rebbetzens from biblical figures’ in the Greek Amphitheatre. Later that night we were very privileged to hear a D’var Torah from Rebbetzen Devorah Gelley. 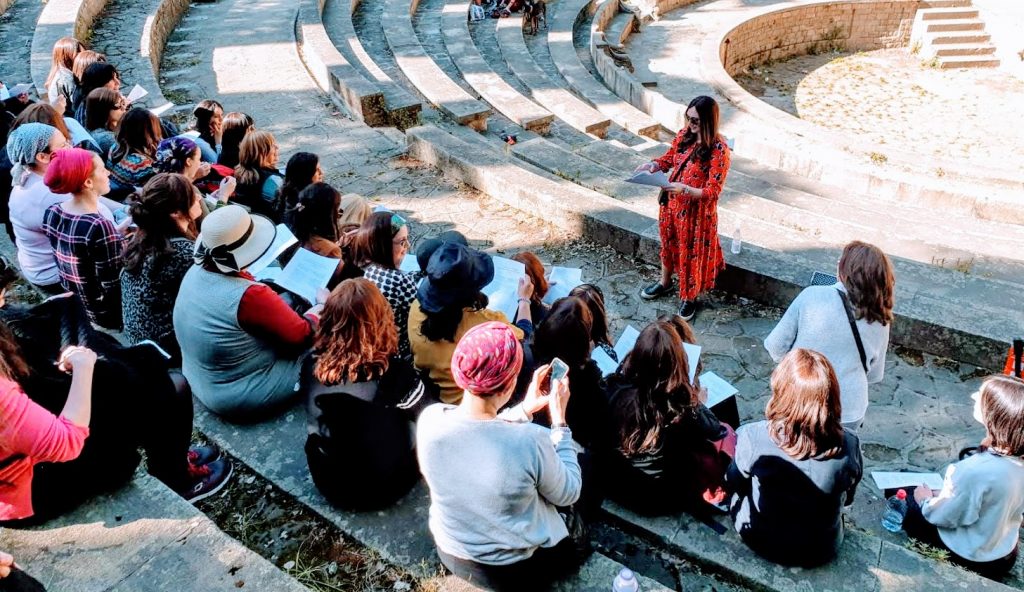 The next morning we had the wonderful opportunity to daven Shacharit and sing Hallel on the beach. Rebbetzen Jaqueline Feldman then inspired us with her very lively ‘Teach on the Beach’ shiur, ‘Kechol Hayam – Timeless Grains of Sand’. 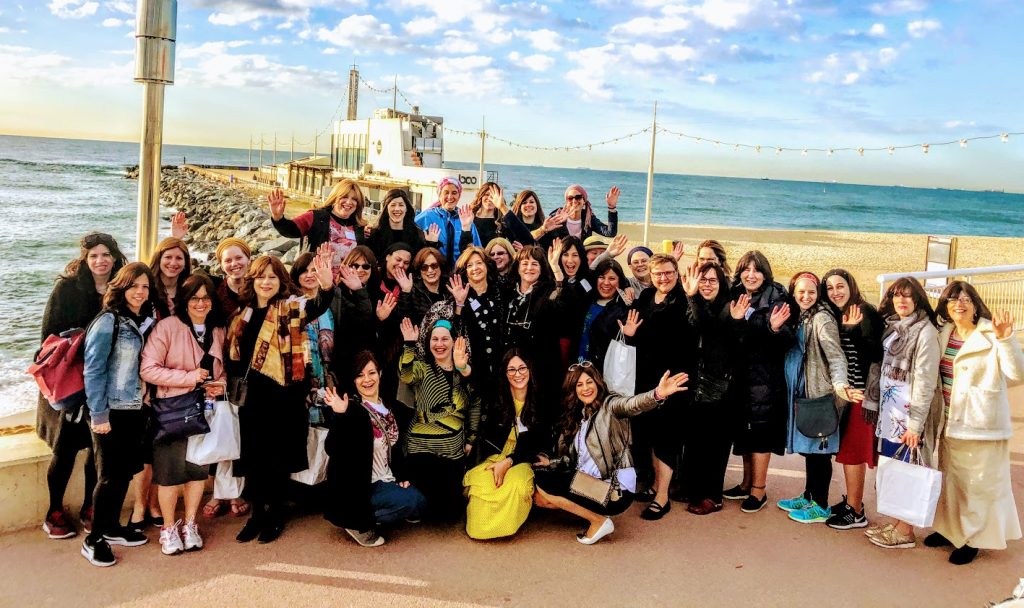 We left Barcelona and drove to the town of Girona, the birthplace of the Ramban (Nachmanadies), one of the greatest Talmudic scholars, whose work we still study today. On the journey, Rebbezten Naomi Lerer delivered a very insightful and thought-provoking shiur about the role of the Rebbetzen entitled ‘Is Good Enough Good Enough?’

In Girona we visited two homes previously owned by Jewish families and saw the cavities in the walls that used to house Mezuzot and we visited the beautiful Jewish Museum (Museu d’Història dels Jueus).

From Girona we travelled on to Besalu at the foothills of the Pyrenees, the picturesque medieval town where we found ourselves at the ancient Mikvah dating back to 1264, which was unexpectantly discovered in 1964. We think that history may have been made by Rebbetzen Chaya Reena Zimmerman delivering a truly exceptional and inspirational shiur in the Mikvah room to all of us, followed by our spontaneous singing of all the songs we could remember with versions of “tahor” (pure) in them. This was an incredibly powerful and emotional experience, a true highlight of the trip.

On our journey back to Barcelona, Rebbetzen Rivkie Pink gave a wonderful D’var Torah in which she spoke about the Leicester Shul Mikvah which was built together with the shul in 1898 and which is currently undergoing major refurbishment. Rivkie’s speech was so poignant in light of the ancient Mikvah we had just visited.

Over the two days, what we learned of the Jewish communities of the Iberian Peninsula was of the richness of Jewish culture, depth of scholarship, and the fact that this community was integral to the economy of Spain. Yet when the Spanish King and Queen decided in 1492 that they wanted to eradicate Judaism from their land, they wiped them out completely, to the point that even today it is a part of history that Spanish schools glaze over.

As much as us Rebbetzens were inspired by our location, being there as a group of Jewish community leaders, in a place where the past is asking something of the future, we offered an answer. The answer – ‘Am Yisrael Chai’ (the nation of Israel lives). We couldn’t stop wondering what King Ferdinand and Queen Isabella would say had they seen 40 Rebbetzens, women with homes and families dedicated to Jewish continuity, walking through the streets of Spain, sharing Torah, song and comradery, whilst gazing out at the pristine beach, relishing in their very Jewishness, 600 years after the Monarchs thought they had wiped us off the very face of their peninsula.

More women than men were murdered in the Inquisition. These women, whose families had converted, still kept the Faith, lit candles on a Friday afternoon in a cupboard, made food for Shabbat and taught their children how to say the ‘Shema’. They couldn’t let go of the faith of their mothers.

The Iberian Peninsula was once the centre of the Jewish world, with the population at its height, numbering half a million Jews at the time, half the world’s Jewish population. Starting in 1391 the Jews of Spain were, forcibly converted, expelled or murdered, and even after conversion, they were hunted and burned at the stake for the next 300 years. The Inquisition chased Crypto-Jews to the furthest corners of the globe.

To find the remnants, the slightest echo of Jewish life in Spain, you need a talented guide and a fair amount of imagination. And yet, as a group of women, we were able to connect with the generations of women who used the Mikvah of Besalu at the worst and the best of times, praying to God for Jewish continuity, Jewish hope, Jewish life, sometimes long after hope was gone.

Thank you to the office of the Chief Rabbi and especially to Valerie and Rachel for the faith they put in us Rebbetzens as an integral part of Jewish continuity and in our power and our value.

By Rebbetzen Ilana Epstein of