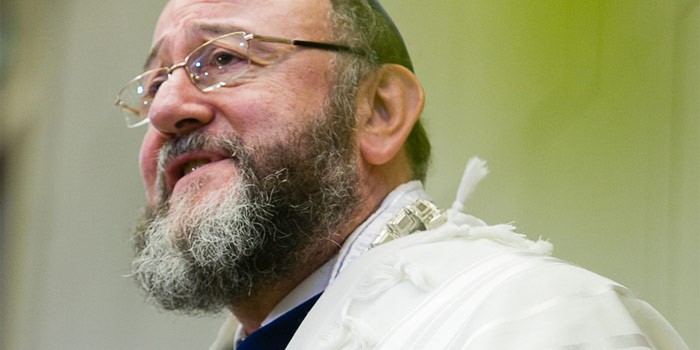 In an interview for The Sunday Times with Sian Griffiths, the Chief Rabbi voices concern about a growth in antisemitic behaviour both on campus and in wider society.

British universities are turning a blind eye to “Jew hatred”, the Chief Rabbi has said.

In his first interview on the subject, Rabbi Ephraim Mirvis said vice-chancellors should be ashamed that the “vilification of a people” and “Zionist bashing” is taking place unchecked on their campuses, where Jewish students are sometimes described by “the ugly term Zios”.

The Chief Rabbi’s remarks come a few weeks before he is due to address students at the Oxford Union. An inquiry into alleged anti-semitism within Oxford University’s Labour club is one of several being conducted by the Labour party, which has suspended more than 50 of its members over such allegations in recent weeks.

Jewish pupils are emerging from Jewish schools well educated and keen to be good citizens, the Chief Rabbi said, only to be met with a “wall of anti-Zionism which they feel and know to be Jew hatred” at university.

“We have seen what Jew hatred can be a template for in history. What troubles me is that the Zionist bashing on campus has gone unchallenged,” he said.

Mirvis, who last week said in a newspaper article that the Labour party has a “severe” problem with anti-semitism, also hit out at Ken Livingstone, the former London mayor . Livingstone was suspended from the Labour party after saying that Hitler had supported Zionism in the 1930s “before he went mad and ended up killing 6m Jews”.

“There is concern about the spread of anti-semitism in Europe. I think the concern is well placed.”

Livingstone made the comments while defending Naz Shah, a Labour MP who had been suspended for her online posts suggesting Israel should be relocated to the United States.

Mirvis said he was “totally amazed and frankly horrified” by Livingstone’s remarks.

“When asked for a response to a blatantly anti-semitic communication that was sent out he failed to condemn it, tried to explain it away and then, just unbelievably, brought Hitler into the picture in such an insensitive way, aggravating the situation,” Mirvis said.

He also warned that attacks on Jewish people were on the rise: “There is concern about the spread of anti-semitism in Europe. I think the concern is well placed.” In Britain the attacks included everything from “graffiti on Jewish buildings, to shouting of abuse at Jewish people, to some percentage of actual physical assault”, he said.

Mirvis said Jewish students should stay in the UK and not leave for universities abroad. “We are not running anywhere,” he said.

After his article had been published, the Chief Rabbi received hostile emails. One read: “If people keep hitting the Jews, don’t you think there’s a reason for it?”

“We are used to that. To be Jewish means to live with the reality of anti-semitism,” said Mirvis.

More than 24 student unions are considering disaffiliation from the National Union of Students after Malia Bouattia, who describes herself as an anti-Zionist, was elected the first female Muslim president of the union.

Mirvis said Jewish students should stay in the UK and not leave for universities abroad. “We are not running anywhere,” he said.

He added that outspoken criticism of Zionism, fashionable in left-wing student unions sympathetic to the Palestinian cause, was a thinly disguised form of anti-semitism, as was the Israeli apartheid week held in several British universities.

He has warned students against signing up to “the anti-Zionist clarion call”.

The Chief Rabbi, who grew up in South Africa under apartheid, said it was “a lie” to describe Israel in such terms: “Not all critics of Israel are anti-semites [but] in too many aspects this new wave of anti-Zionism is a form of Jew hatred.”