Having spent Shabbat with a handful of Birmingham communities, the Chief Rabbi proceeded to Manchester, where he inducted two new Rabbis into office before their thrilled prospective communities.

Chief Rabbi Mirvis first delivered a congratulatory address to Rabbi Benjy Simmonds, the incoming head of the Stenecourt community, and recited a prayer during a ceremony attended by some 350 people. Rabbi Simmonds was already well-acquainted with the congregation, having served as Stenecourt’s Assistant Minister since 2001. 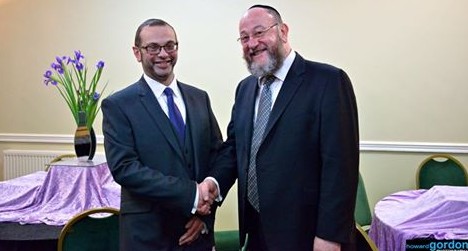 That afternoon, the Chief Rabbi inducted Rabbi Chanan Atlas into his new post heading South Manchester’s Yeshurun community, congratulating him on his appointment and wishing him well in the position, and reciting a prayer as part of the inauguration ceremony. Community members had eagerly anticipated Rabbi and Rebetzen Atlas’ appointment, viewing their respective capabilities as highly suited to leading the congregation. Last December, the shul Chairman Tony Kaye said as much, regarding Rabbi Chanan’s “deep knowledge of Halachah, Tanach, Talmud and Jewish history” and Rebbetzen Nechama’s scholarly and educational qualifications as perfect for a “forward-thinking kehilla” like Yeshurun.