‘Our survival depends on education’ – Chief Rabbi to rabbinical conference 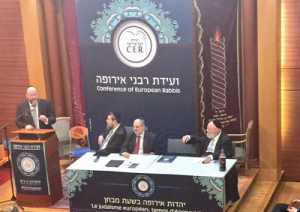 The Chief Rabbi addresses the Conference of European Rabbis

Speaking as the Associate President of the Conference, he told the biannual congress of the European Rabbinate that “Education is the key to a bright future for European Jewry.” From the event emerged a unanimous desire to see the introduction of continent-wide laws against racism and anti-Semitism, with the issue of rising extremism forming the basis of this decision.

The previous day, Chief Rabbi Mirvis had attended the Lord Jakobovitz prize-giving ceremony, which saw the CER honour the French Prime Minister Manuel Valls. There, in his CER presidential capacity, he presented a token of appreciation to the Chief of Staff of the French army for the protection afforded Jewish sites in France and expressed his profound gratitude: “The Jews of Europe are blessed to have many outstanding friends.”