The Chief Rabbi was at the forefront of Mitzvah Day activities last week, as the now globally-observed day of collective social action celebrated its tenth anniversary.

Synagogues, schools and youth movements, both from within the Jewish community and beyond, devoted their time and energy to innumerable worthy causes committed to affecting tangible change within our society. Of the some 350 events occurring across the UK, Chief Rabbi Mirvis attended 5, all hosted or co-hosted by Jewish communities in and around North London.

The Chief Rabbi began his rounds of local initiatives at Borehamwood Tesco, where sprightly volunteers from Borehamwood and Elstree Synagogue had set up a temporary foodbank to collect provisions for users of a local shelter. From here he proceeded to Radlett United Synagogue, where he was immersed in a hive of charitable activity – from cooking meals for the homeless, to making toys for young hospital patients and planting pots for Norwood Care Homes, this congregation threw the full weight of its community behind helping the disadvantaged.

The Chief Rabbi enjoys Mitzvah Day with the community

After a short stop at Bushey Barnados, where the Chief Rabbi applauded the blossoming interfaith relations evinced by the joint cloth-sorting efforts of Jewish and Christian locals (from Bushey United and St Peter’s Church respectively), he travelled to Belmont United in Stanmore. Here he chatted with the jovial attendees of a ‘Sunshine for Seniors’ lunch, which, with the assistance of Moriah JPS students, had been organised to provide elderly congregants with a memorable social occasion.

The Chief Rabbi’s tour culminated in a high-profile interfaith cooking session at Edgware United, for which MP Luciana Berger and Muslim Council of Britain representative Sheikh Ibrahim Mogra also came out to support Jewish and Muslim youths as they prepared a three-course meal for the homeless occupants of the Barnet Winter Shelter. The event’s cross-communal nature really resonated with the Chief Rabbi, who told a Guardian journalist that “We must strengthen links and build bridges for tolerance and harmony.” 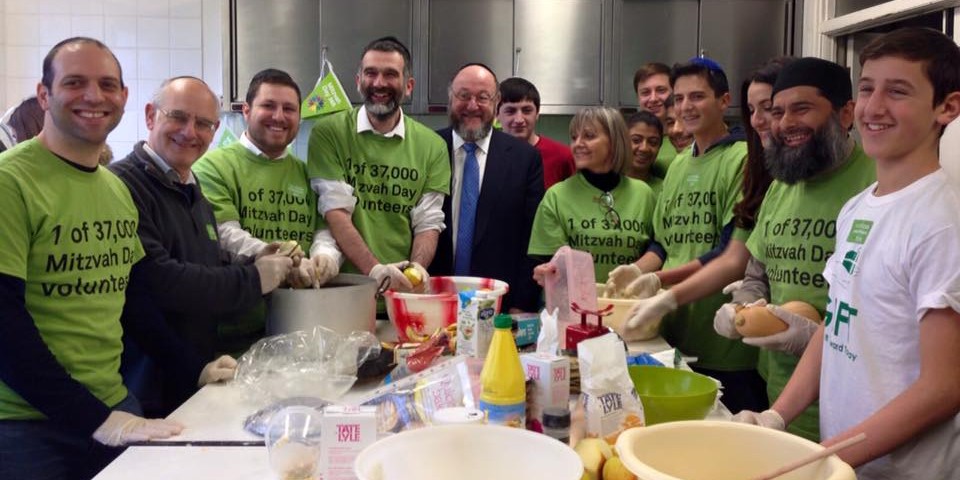 Reflecting on the impressive levels of engagement, the Chief Rabbi said that it had “been wonderful to see so many people giving their time to so many projects as part of Mitzvah Day. I’ve seen some fantastic work in Borehamwood, Radlett, Bushey, Belmont and Edgware. Well done to all the volunteers, wherever you took part.”