Chief Rabbi calls for tolerance in wake of Paris attacks

The Chief Rabbi has condemned the Paris terrorist attacks in the strongest possible terms, while urging the Jewish community to resist a dangerous tendency to blame the refugees fleeing the Middle East.

Chief Rabbi Mirvis issued a statement as soon as Shabbat went out, deploring the depravity of the attacks that claimed 130 lives across the French capital. He professed his solidarity with the families of those killed and the many wounded:

“I am so deeply shocked to hear about the horrific events in Paris. Our hearts go out to the families of those killed and the many wounded in this senseless and brutal attack on our freedom and our democratic  values.”

In response to a renewed wave of prejudice and hostility directed at the millions of refugees departing their war-torn homelands, the Chief Rabbi used diverse channels to quell anger in the community and wider society. In an Op-Ed for the Jewish News and letter to The Times, he reiterated his conclusion – made public days earlier in an interview with BBC Radio 4 – that there are “hundreds of thousands of refugees who are the victims of evil, not the perpetrators of it.”

He drew on his experience of meeting refugees, having travelled to the Greek refugee camp of Idomeni just days prior to the Paris attacks to assess the impact of Jewish community fundraising efforts.  “Between 4,000 and 10,000 people are passing through Idomeni every day,” he said, “it would be impossible to make any kind of generalisation about the type of people they are, their intentions and motivations.”  He had been impressed by the impact of Jewish community fundraising efforts. 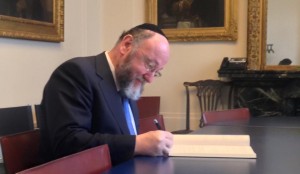 As well as visiting the French embassy to sign the official Book of Condolence, the Chief Rabbi also met with fellow faith leaders in a cross-communal display of solidarity.