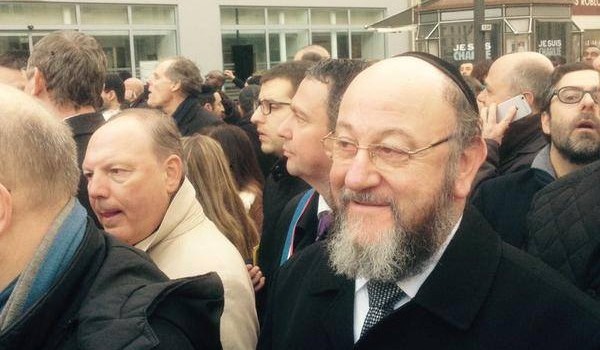 The Chief Rabbi joined world leaders for a huge rally held in defiance of terrorism and in support of freedom as people around the world mourned the victims of devastating terrorist attacks in Paris.

In the aftermath of the coordinated attacks, which targeted both the Charlie Hebdo magazine offices and a kosher supermarket, community heads and dignitaries converged on Paris to lead a rally that swelled to 1 million people. Chief Rabbi Mirvis attended at the invitation of his French counterpart, Chief Rabbi Chaim Korsia, who thanked him for journeying to stand with the French people in general, and with the Jewish community. Following the march, Chief Rabbi Mirvis recited a prayer at the memorial event in the Great Synagogue.

On the eve on the preceding Shabbat, he had appealed to all communities in the UK and the Commonwealth to recite Tehilim for the hostages – a plea taken up by numerous communities the following morning.