Chief Rabbi propounds Torah as ‘handbook for life’ at Limmud

The Chief Rabbi has championed the historical Jewish tradition of privileging education, citing this unchanging priority as a key driving force in the community’s survival.

His comments, which also delved into the self-improving merits of studying Torah, came in the second of two Limmud sessions that he was invited to deliver.

Addressing a packed auditorium at the highly-popular annual conference, which sees over 2,500 (mostly Jewish) people of all ages and nationalities converge on a university campus for explanatory classes, lectures, Torah study and cultural activities, Chief Rabbi Mirvis emphasised the need to continue providing the community with a Torah-based education in order to ensure its longevity. “The study of Torah is the greatest enabler. Once you have studied Torah, you know what is written in the handbook.” 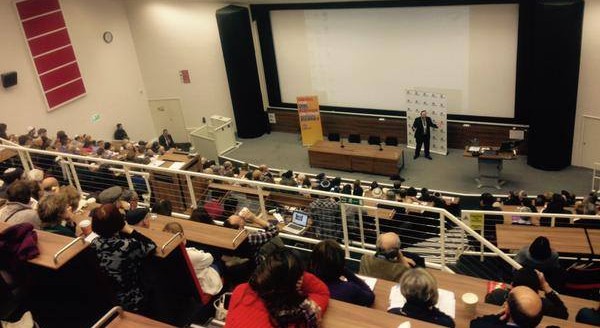 The Chief Rabbi addresses a packed lecture theatre at the Limmud annual conference.

He explained the profound effect of religious study on how an individual conducts himself and his life, saying that for him, “it will have a deep-rooted effect on everything I do for the rest of my life.” The Chief Rabbi insisted that despite its obvious importance, Jewish education should not overshadow secular education, calling on the community to establish cultural and social centres to guide the community in such areas. “A combination of Torah and worldliness is the ideal recipe for Jewish living,” he said.

Watch the Chief Rabbi in action at Limmud here.