The Chief Rabbi’s trip to India

The Chief Rabbi has just returned from an historic trip to India during which he visited ancient communities in Cochin, Mumbai, Kolkatta and Delhi, as well as social responsibility projects in some of the country’s most deprived areas. The ten-day official trip, which saw Chief Rabbi Mirvis pay visits to 19 communities, was the first undertaken by a Chief Rabbi of the United Hebrew Congregations of the Commonwealth.

Reflecting on the astonishing diversity of Indian Jewry, the Chief Rabbi expressed his “great pleasure” at being able to “spend time with so many different communities, each with their own unique character and all with such a rich and magnificent history. India is a truly special part of the rich tapestry of Commonwealth countries.” 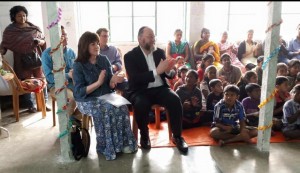 Beginning his trip in Delhi, where he visited the city’s Jewish community in their historic place of worship – the Judah Hyam Synagogue – and met with the incoming Indian High Commissioner to the UK, Navtej Sarna, the Chief Rabbi continued to Kolkatta. Here he had the privilege of performing the city’s first Torah reading to be conducted in a weekday service in 10 years, and visited the first of various charities, the Economic Rural Development Society (ERDS), which provides support for people living in extreme poverty by offering vocational training as a means of breaking the cycle of deprivation.

ERDS, which receives much of its funding from the UK-based Jewish charity Tzedek, also ensures the shelter, education and health of young children. The Chief Rabbi and Valerie Mirvis met with these young beneficiaries of ERDS at the charity’s Boral Multi-project Centre, where they performed a play for their guests.

The Magen Hasidim and Shaarei Rachamim congregations received the Chief Rabbi on arrival at his next port of call, Mumbai, before he went on to spend Shabbat with the community of the Knesset Eliyahu Synagogue, which held a Shabbat dinner in his and Valerie Mirvis’ honour. Chief Rabbi Mirvis used his sermon, given to a packed shul, to express his appreciation and admiration for the Mumbai Jewish community, commending them on having successfully sustained Jewish life in the city.

Shabbat lunch the following day was hosted by the local Chabad House, courtesy of hosts Rabbi Yisroel and Chaya Kozlovsky. The Jewish community centre was left devastated in 2008 after terrorists murdered Rabbi Gavriel Holtzberg, his wife Rivka and a handful of others. 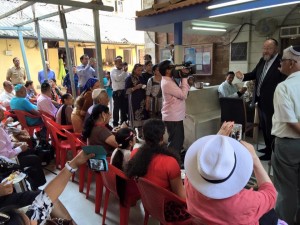 Addressing the Bet El community of Panvel in the countryside outside MumbaiIndians, as well as the constructive work being undertaken to alleviate their plight – with support

The next day, the Chief Rabbi and Valerie Mirvis travelled to the countryside outside Mumbai, where large crowds gathered to greet them in the communities of Panvel, Pen, Alibaug and Jhirad. Traditional ceremonies were held in their honour and the Chief Rabbi blessed all those who came. Back in the Mumbai the following day, special receptions were held in Mumbai at the Tiferet Yisael, Magen David and Shaarei Ratzon Synagogues to welcome Chief Rabbi and Valerie.

Continuing his objective of highlighting the deprivation suffered by millions of from the Jewish community – the Chief Rabbi visited two further social initiatives. He journeyed to Kalwa, a slum north of Mumbai, to meet and teach the children benefitting from the Israeli-founded The Gabriel Project, which provides education, healthcare and nutrition. The Chief Rabbi and Valerie were greeted by a class of young pupils who first recited the Indian National Pledge, before they were themselves led in a rendition of ‘Heads, Shoulders, Knees and Toes’ by their guests of honour.

During the visit to Kalwa, Chief Rabbi Mirvis also saw the work of another organisation called Sundara, whose soap recycling programme tackles hygiene-related deaths. Following this was a tour of the impressive facilities at The Gabriel Project’s Shravsn Medical Centre, the only such institution serving 200,000 people in the slums, where he affixed a mezuzah to the entrance. 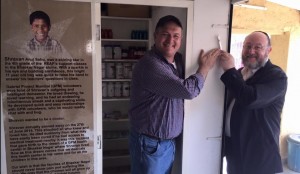 The Chief Rabbi affixes a mezuzah to the entrance of the Shravsn Medical Centre, an institution funded by The Gabriel Project, alongside the NGOs founder Jacob Sztokman

Reflecting on the hardships borne by the people of Kalwa, the Chief Rabbi noted their “desperate poverty, hunger and deprivation,” but was buoyed by evidence that “Jewish communities around the world are…doing a great deal of work in this area…I was pleased to see first-hand how support from the UK Jewish community is being used to help those in great need.”

He added: “As Jews, we have a responsibility to ensure that, where possible, our charity extends beyond our own community to people who we may never meet but who are so deserving of our help. I call upon all Jews to recognise that responsibility and will be using my experiences here to raise awareness about what more can be done in this sphere.” 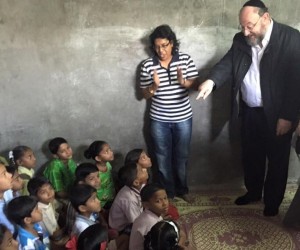 Before leaving Mumbai for Cochin, where he visited the grand and historic Paradesi Synagogue, Chief Rabbi Mirvis was welcomed by the Jewish community of Thane, leading a special Mincha service amidst congregants.