In an official ceremony attended by numerous MPs, the Mayor of Barnet and the Secretary of State for Northern Ireland, Theresa Villiers, the Chief Rabbi had conferred upon him the Freedom of the London Borough of Barnet. 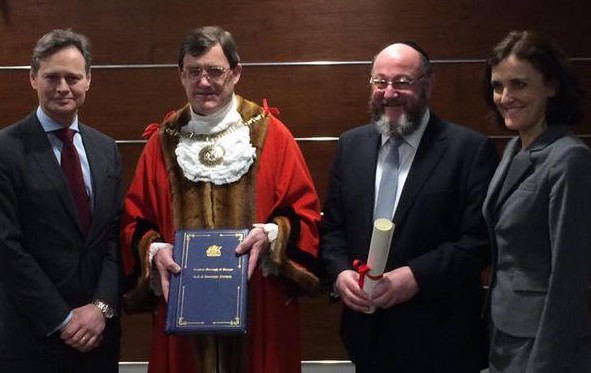 Chief Rabbi Mirvis received a scroll of honour recording the motion for his accolade, which was passed by a unanimous council vote. During the event in Hendon, which attracted hundreds, council leader Richard Cornelius described the honour as “our highest mark of esteem,” and credited the Chief Rabbi with helping to quell communal anxiety following a spate of anti-Semitic attacks in Paris.

Chief Rabbi Mirvis viewed the award as a recognition of communal, rather than individual achievement, saying: “I see this essentially [as] an honour for our community.” This formal acknowledgement of the community’s contribution to the borough was a source of great pride to him, he added.

Coverage of the ceremony in the Jewish News:

Chief Rabbi honoured with freedom of borough of Barnet

The Chief Rabbi has described being honoured with the freedom of the borough of Barnet as “recognition for our community”.

Ephraim Mirvis followed in the footsteps of Margaret Thatcher and his predecessor Lord Sacks in receiving the accolade at a ceremony attended by hundreds of guests in Hendon on Tuesday.

He said: “I see this as essentially an honour for our community. This is very special for us and I treasure that recognition is given for the contribution the community gives to the borough in so many ways.”

The motion for the award, put forward last year by Councillor Eva Greenspan and passed unanimously, spoke of his contribution to the “borough, nationally and internationally to the enhancement of the Jewish community and the promotion of interfaith understanding and community cohesion”.

Addressing the ceremony attended by Northern Ireland Secretary Theresa Villiers, Council leader Richard Cornelius described the honour as “our highest mark of esteem and joked: “Barnet does not have the special hangman’s rope for freemen, right of passage for flocks of sheep over bridges – perhaps we should introduce special priority for turning right at Henlys corner or, to adapt someone else`s idea, a permit to double park on double yellow lines.”

He thanked the chief rabbi for helping to “still the anxiety” following the Paris attacks and welcomed the opportunity to reaffirm what importance of the Jewish community with the “Barnet family”.

After musical entertainment from children from the Sacks Morasha Jewish Primary School, Labour group leader Alison Moore said she didn’t know the chief rabbi well enough to describe him as a “feminist” but hailed his appointment of the first Orthodox female halachic advisor while still minister at Finchley United and his active support for Jewish Women’s Aid.

The chief rabbi – only the 21st freeman of the borough – praised the borough’s commitment to education and added it’s “always lovely to know that the place where we live is a place where we and the community fee totally at home”.