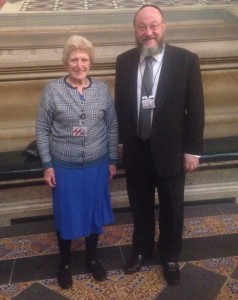 The Chief Rabbi photographed with Baroness Butler-Sloss, who chaired a commission on religion on behalf of the Woolf Institute

The Chief Rabbi, in his capacity as the principal representative of British Jewry, this week presented evidence to the Commission on Religion and Belief in British Public Life. Chaired by Baroness Butler-Sloss and convened by the Woolf Institute, the Commission seeks to evaluate the place and role of religion in contemporary Britain.