Chief Rabbi visits the Idomeni refugee camp with US delegation

The Chief Rabbi led a delegation of United Synagogue Rabbis on a trip to one of Greece’s largest refugee camps to meet refugees and to gauge the impact of the Jewish community’s response to the region’s ongoing humanitarian crisis.

British Jewry had responded impressively to calls for donations to assist the streams of Middle Eastern refugees fleeing persecution and civil war in their home countries. World Jewish Relief is transferring funds directly to migrants as part of both short and long-term strategies to alleviate their current plight and help them on their way to a better future.

Chief Rabbi Mirvis, accompanied by Rabbi Bergson, Rabbi Mason, Rabbi Boudilovsky and Dayan Binstock, arrived in the Greek border refugee camp of Idomeni to witness these short-term strategies in practice. Thousands of beleaguered men, women and children were being bussed in to join long queues for registration, where WJR provided much-needed sustenance and water. 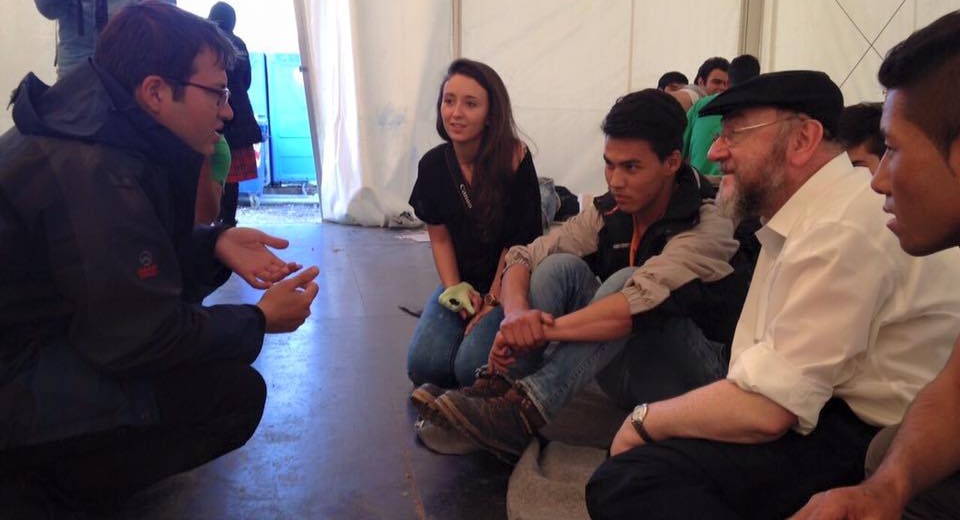 A mobile medical unit – also funded through the Jewish community’s generous contribution – was on hand to treat over 100 seriously ill people a day, saving lives that are still endangered, despite having escaped bloody conflict and crossed tumultuous seas.

The Chief Rabbi engaged with many migrants, asking them where they had come from, and where they hoped to end up. Answers were manifold – from Syria, from Libya, from Afghanistan and Eritrea, they said. They shared tales of their hasty escapes, and the terrifying circumstances that had spurred them, while Chief Rabbi Mirvis listened intently and expressed his profound sympathy. The experience, he said, was humbling.

He told the Jewish Chronicle: “Every human soul is precious, and it is central to our Jewish ethos for us to reach to reach out and assist whoever we can.”

Speaking to BBC Radio 4 on his return, he drew parallels between the refugees’ foggy trajectory and the Bereshit story of Hagar and the angel, in which Hagar can only respond to one of the angel’s queries (‘Where are you going?’), because the immediate need to escape her mistress trumps that of deciding a final destination.

The Chief Rabbi expressed pride on behalf of the Jewish community, informing the JC that efforts to ease the refugee crisis must be sustained, because this is “an ongoing crisis and will need an ongoing response.”

The day prior to visiting Idomeni, he had addressed leaders of the Greek Jewish community at the Conference of European Rabbis, praising their fortitude in the face of adversities that include a rise in nationalistic, anti-Semitic sentiment.

“We salute you for maintaining a thriving community through challenging times,” he said.