The Chief Rabbi was delighted to join HRH the Prince of Wales at Buckingham Palace for a meeting of the ‘Step up to Serve’ Advisory Council which comprises leaders from across the business, education, voluntary and public sector.

The Chief Rabbi joined the Council earlier this year at the invitation of Sir Nick Parker, the Chairman of ‘Step up to Serve’, and this was his first opportunity to share his thoughts on social responsibility with the Council.

The aim of the #iwill campaign is to increase the number of 10 to 20 year olds participating in social action; recognize the contribution young people make to their local communities and help to promote the benefit this has to the wealth, health and happiness of the nation. 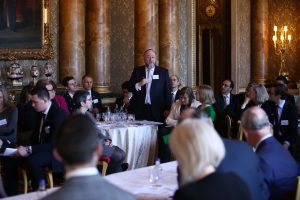 The ‘Step up to Serve’ campaign has already witnessed tremendous success – more than ever before, young people are ready to take an active part in improving their communities. By doing so, they know that they can help those around them at the same time as developing skills for life.

During the event, which updated the Advisory Council on recent progress, as well as looking ahead to the potential challenges of next year, the Chief Rabbi highlighted the success of the Jewish Community in the field of youth social action. He said, “in the Jewish community, we are privileged to have developed institutions that we can be proud of. As such, opportunities for social responsibility are boundless in our community”.

“These institutions have arisen from a concerted effort, over time, to change attitudes, in which the idea of ‘giving’ has become second nature”. The Chief Rabbi emphasised though that a change in attitude was central to any progress – “only once there has been this shift in attitude, can we create the institutions to implement the desired changes”.

The Chief Rabbi added, “in the Jewish community, we have bridged the gap between affluent and the less affluent – there is no distinction when it comes to giving”.

Find out more about the ‘Step up to Serve’ initiative and the #iwill campaign here.