Last night the Chief Rabbi lit Chanukiot in both Westminster and Whitehall for the fourth night of Chanukah.

Jewish community leaders came out in force for the Board of Deputies’ annual Chanukah lighting in the House of Commons, gathering around a silver Chanukiah as the Chief Rabbi lit candles and led prayers. A roster of prominent politicians, including Home Secretary Theresa May MP and Deputy Labour leader Tom Watson, pledged their support for British Jewry and reflected on the pertinence of Chanukah’s message today. Following a Chanukah medley from the Hertsmere Jewish Primary School Choir, the Home Secretary acknowledged an historical Jewish contribution to “the broad spectrum of both public and private life,” before Tom Watson MP cautioned against taking religious freedom – a virtue the Chanukah story expounds – for granted, especially in light recent terrorist attacks in Europe. 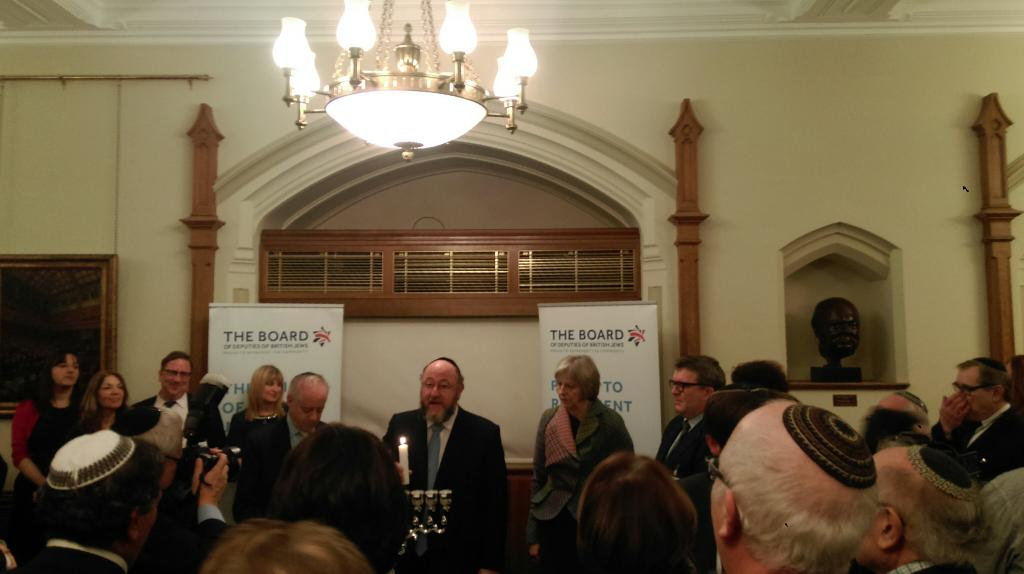 Chief Rabbi Mirvis kindles the lights in the House of Commons

At a subsequent Chanukah event hosted by the Civil Service Jewish Network in Admiralty House (Top), the Chief Rabbi reflected on the etymology of the word Chanukah, which being a derivative of the Hebrew word for education – ‘Chinuch’ – demonstrates that ‘education’ required ‘dedication’ (Chanukah’s meaning). He commended civil servants for “bringing light into the nation” by working to alleviate societal problems, crediting them with assuming their “social responsibility.” Secretary of State for Education, Nicky Morgan MP, alighted on the consistent success of Jewish faith schools in the national league tables, and expressed a desire to see more established. She also promoted mutual respect between peoples in her call for “all of us be free to practice our faith and beliefs,” before Chief Rabbi Mirvis proceeded to kindle the lights and lead prayers.

On Tuesday evening he was honoured to light candles at 10 Downing Street at the invitation of the Prime Minister, though Home Secretary Theresa May stood in for David Cameron, who was away visiting victims of flooding. The Chief Rabbi observed the parallels apparent in the Chanukah story and current global crises in a speech that you can read here.