To mark the 70th anniversary of the liberation of Bergen Belsen concentration camp, the Chief Rabbi journeyed to the German camp’s former site to partake in a series of commemoration ceremonies that honoured the full gamut of internees who died during World War 2. 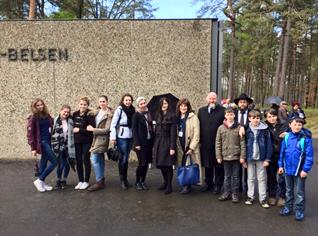 First, he paid his respects as part of a gathering at the Obelisk memorial, before a commemoration at the Wooden Cross and a wreath-laying at the Jewish memorial as part of the AJEX (Association of Jewish Ex-Servicemen and Women) commemoration ceremony. Here, in an address to a group including some 200 students and teachers brought to the camp by the Holocaust Educational Trust, he spoke of the “unimaginable” horrors perpetuated here. “Because Bergen-Belsen was razed to the ground, it is left up to the imagination, for us to presume what took place here. We imagine the unimaginable.”

He expressed the Jewish people’s ongoing grief for victims, and listened to the stories of survivors from across the world. He also interacted with the Chai Youth Club of Hannover in a more intimate session.